The high-octane drama of Liz Truss’s crash from power exemplifies the raging turmoil at the top of British society. However, what is yet to be seen is whether the dramatic phenomenon of the most short-lived Prime Minister in British history is soon to be rivalled by the sensational spectacle of a monarch whose reign hastens the dismantling of the ancient institution of royal power.

Ordinarily, to even imagine let alone dream of the Monarchy’s demise is considered madness in some respectable circles of British society, what with republicanism permanently consigned to the margins of British politics and public opinion broadly positive towards the Monarchy despite occasional blips in the past decades.

But these are no ordinary times either in Britain or anywhere else. A combination of geopolitical tension and faltering economic growth has provoked a whirlwind of political instability in Britain. The death of Queen Elizabeth II in the midst of this turmoil momentarily led to a revival of royalist sentiment which the establishment latched onto with the hope of gaining some respite but that has done little to stop the political crisis.

Rather the crisis has continued but there is now the prospect that with the Queen out of the equation and a scandal-laden King Charles on the throne, the monarchy may no longer be able to play the role it has often played in history – that of a bulwark of support for the capitalist system.

During the Queen’s burial, attempts were made to portray a country united behind the institution of monarchy. No doubt, the Queen had always been popular although the same cannot be said of other Royals and the monarchy itself. A poll before her death showed that 81 per cent held the Queen in positive regard. This was obviously reflected in the outpour of emotion over her passing with thousands lining up on the streets to witness the Queen’s funeral procession while millions watched on their TVs across the world.

But underneath this is the bubbling resentment against the Monarchy as an institution. For instance, only 39 per cent today compared to 66 per cent in 2011 believe that Britain should continue to have a monarchy in the coming 100 years. Also, while 61 per cent considered the monarchy good for Britain in 2011, this reduced to 56 per cent in 2022. Anti-monarchy feelings appear more intense among young people. For instance, while in 2011, 67 per cent of people aged 18 to 24 believed Britain should continue to have a monarchy, this slumped to 39 per cent in 2022.

However, there was an improvement in the number of young people who believed the royal family continue to play an important role. For instance, while in 2011 74 percent believed the monarchy played a less important role, this jumped to 53 percent in 2022. On the whole, the uptick in favourable rating rather than a revival of support for the monarchy among young people, appears to be a momentary development occasioned by the Platinum jubilee celebration this year and the outpour of emotion over the Queen’s death.

Outside the British Isles

Elsewhere, opinions about the Crown are no less divided, especially among citizens of the former colonies of the British Empire. Such as Nigerian-Trinidadian-American and Critical Race Theory Professor at Carnegie Mellon University, Uju Anya, who literally set the internet on fire when she tweeted, ‘I heard the chief monarch of a thieving, raping genocidal empire is finally dying. May her pain be excruciating’.

‘If the queen had apologized for slavery, colonialism, and neocolonialism and urged the crown to offer reparations for the millions of lives taken in her/their names, then perhaps I would do the human thing and feel bad. As a Kenyan, I feel nothing’.

In subsequent tweets, she called out Britain and the Monarchy for complicity in the genocide that occurred during the Nigerian civil war of 1967-70 when more than a million ethnic Igbos, mostly women, and children, perished. In Kenya, the Queen’s death evoked painful recollections of the unspeakable crimes committed by the British Empire during the Mau Mau uprising while for South Africa’s radical left party, Economic Freedom Fighter (EFF), Queen Elizabeth’s death is a reminder of a tragic period in its country and Africa's history.

Now there is a growing call in South Africa for the return of the ‘Great Star of Africa’ or Culinan 1 - a 500-carat diamond held on the end of a sceptre belonging to the Queen which is believed to have been mined in South Africa in 1905. Elsewhere, others demand from Britain a public apology for its colonial crimes. Like Mukoma Wa Ngugi, a novelist and son of renowned Kenyan writer Ngugi Wa Thiong'o, put it: ‘If the queen had apologized for slavery, colonialism, and neocolonialism and urged the crown to offer reparations for the millions of lives taken in her/their names, then perhaps I would do the human thing and feel bad. As a Kenyan, I feel nothing’.

From Stability to Instability

The new Charles is starting off his reign on a weaker basis than his mother and in a period of turmoil. By the time of his Coronation on 6 May 2023, King Charles would be 74 – the oldest person ever in the history of the Monarchy to be crowned. He will not have the same energy and appeal as the late Queen who was crowned at 25 years old and spent the next decades traveling around the commonwealth, making speeches and hugging natives, to shore up support for Britain and the crown.

Notwithstanding the momentary uptick in his approval rating upon accession, King Charles is unlikely to match the late Queen’s popularity in the long run. This will certainly have an effect on the monarchy’s influence in the coming period.

Meanwhile, unlike the Queen who was above politics and scandal, the king continues to carry a baggage of scandal bordering on infidelity, using his charity for a ‘cash for honours’ scheme, interference in politics, receiving money from Osama Bin Laden’s family etc. Also, last year, Meghan Markle revealed in one of her interviews with Oprah that there had been several conversations between Prince Harry and an unidentified high-ranking royal about her child and how dark his skin might be when he’s born. Some speculate that the high-ranking royal might have been Harry’s own father, Prince Charles. These sorts of scandals will continue to hurt the King and fan republican sentiments.

Over the past decades, the commonwealth grew from just eight nations to 56 members representing two billion people. Now under a Sovereign such as Charles III, there is no telling what would happen.

To make matters worse, King Charles’ coronation will cost taxpayers a fortune at a period when many are scarcely able to afford heating and food. The Queen’s iconic coronation about 70 years ago, cost £1.57 million   – the equivalent of £46 million today. This jarring profligacy of the royal family will definitely increase resentment among the youth many of whom consider the Monarchy an outmoded institution. But even among other layers, a shift in outlook can take place due to the worsening social, and economic situation.

Not the least is what impact all these would have on the commonwealth – a voluntary political institution of post-colonial states headed by the British crown. Over the past decades, the organization grew from just eight nations to 56 members representing two billion people. Now under a Sovereign such as Charles III, there is no telling what would happen. 15 of the member states take the King as their Sovereign but this can change as times goes on.

Looking ahead, Dele Seteolu, a Nigerian professor of international relations at the Lagos State University (LASU), believes that ‘though it (the commonwealth) will continue to exist as it has always been, its power and influence as an international political organization is likely going to wane’.

By and large, the jury is still out on King Charles III reign. However, the tell-tale signs are too obvious to miss. Queen Elizabeth’s accession to the throne coincided with the end of the Empire; her son, King Charles III’s accession looks set to lead first to a decline and finally the end of the Monarchy. In doing this, he would be living true to his name taken from a predecessor, King Charles the First, whose reign in the 1640s led to two civil wars, and a decade-long abolition of the monarchy.

Obiora Ikoku is a freelance writer, author and activist from Nigeria.

Obiora Ikoku is a freelance writer, author and activist from Nigeria.

The war in Ukraine has led Moscow to turn away from the South Caucasus, throwing off the delicate geo-political balance in favour of Iran

‘It is clear that Congolese people are against MONUSCO’

The controversial MONUSCO mandate has been extended. While welcomed by the international community, the mission has failed to build local legitimacy 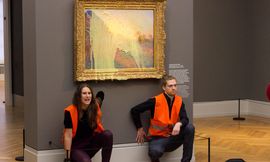 In defence of the art-targeting climate activists

How can anyone be a fascist if everyone is?

The regularity with which accusations of fascism are being voiced is concerning. It is high time we bid the fixation on fascism labels farewell 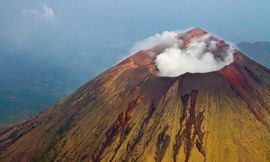 Nicaragua: from liberation to a new dictatorship

The Sandinista rebels, headed by Daniel Ortega, toppled what should be the last dictator. But now, the supposed hero became the tyrant