Ever since the financial and economic crisis, the European Union has been in a mode that can best be described as ‘taking it slowly.’ The economic cohesion of EU member states ended abruptly in 2008, carrying serious repercussions for Europe’s workforce. Real wages have been stagnating or even falling, while the nation state’s power has continuously declined. In Germany alone, the public costs of saving the financial sector are estimated at €68bn. Deutsche Bank Research estimates the crisis-related reduction in world GDP to be four trillion US dollars.

As a result, rising unemployment and divergence in wage development are causing an increasing division of society in the member states. A handful of billionaires faces a host precariously employed workers. Climate neutrality, energy transition and efficiency, however, mean high costs that cannot be met by those same workers. In Europe, 40 per cent of working conditions are already classified as precarious.

Surveys show that 30 per cent of Germans feel left behind and/or not represented by mainstream parties. Hence, they don’t vote. In France, the ‘yellow vest’ movement is evolving into a new challenge for trade unions and political parties. In Italy, left-wing and increasingly right-wing populist parties are enjoying unprecedented support from voters protesting against the EU’s austerity policies. It’s because of the EU’s crisis mode that climate and social policy has been granted little room on the political agenda.

The scientific evidence is clear: the current economic model will soon reach its planetary limits. However, the real political problem of climate change lies in its long-term cause-and-effect relationship. Climate protection does not directly improve the situation. Likewise, neglecting climate protection has no directly identifiable consequences. These come with a time delay. This makes political action more difficult and affects future generations in particular. The young student movement ‘Fridays for Future’ might function as a trigger for radical change: in the climate strike in early March 2019, 1.2 million young people took to the streets, with 300,000 of them in Germany. On 20 September, 1.4 million people in Germany alone took to the streets in the Global Strike for Climate. Their demand is simple: having the right to a future.

The EU’s strategic agenda for 2019-2024 provides a foundation for this to happen. The concept of the EU as a single market, based on the rule of law and competitiveness, will be given a new equal priority with the ‘building a climate-neutral, green, fair and social Europe.’ The agenda mentions a transition to a climate-friendly economy, a major mobilisation of private and public investment, of accelerating the transition to renewable energy and increasing energy efficiency. And we need to remember how important it is to accompany and support communities and individuals.

The implementation of the European Pillar of Social Rights should ensure adequate social protection and inclusive labour markets, promote cohesion, and ensure good access to health care. In addition, the fight against inequalities that affect young people in particular is seen as the most urgent task.

One may criticise that climate and social policy are to be treated as one. From a trade union point of view however, this connection is necessary because an ambitious climate policy implies a radical change in traditional key industries, especially in the energy and automobile industries. Business models will change: there will be new market entrants while old ones will leave the market. This structural change can be successful only if it is shaped by a state capable of acting effectively, and if the workforce and citizens have the opportunity to participate. The German coal compromise offers a good example of what this type of structural change means for an economic sector, and what efforts are needed.

The end of GDP?

The recommendations of the ‘Coal Commission’ include: €20bn in structural funding to be used over the next 20 years to attract innovative companies through new infrastructure and economic development in which new and better jobs are to be created. Furthermore, losses in income are to be offset, further training organised and electricity price effects compensated. If the Coal Commission’s report recommendation are implemented, all this should be organised and collectively agreed with the involvement of the unions on site.

Without a realignment of the economy, it is likely that we are heading for global warming of between three and five degrees. Among other things, this is due to the fact that the reduction in greenhouse gases is nullified when the rate of economic growth is greater than 1.9 per cent. Currently, global GDP is growing by three percent. Therefore, limiting global warming to less than two degrees is incompatible with a growth-only economy.

So the question emerges: can economic justice be a substitute for growth?

If we do not stop climate change, so-called dead zones will emerge: these are zones that are so hot that people can no longer survive there unless they have technical protective equipment. This includes, for example, Brazil: the Brazilian president’s refusal to acknowledge this fact is tantamount to casting a vote for their own destruction. However, this reality also means that humanity must increasingly face mass migrations due to the uninhabitability of these dead zones.

‘Capitalism is at an impasse,’ as French Finance Minister Le Maire concisely declared. The state of capitalism and the market’s ability to meet collective needs are at the heart of the debate. Our way of doing business and our understanding of prosperity and growth must undergo radical change. A planned economic turnaround is required – which also means a reduction in annual production and consumption.

Does this mean thrift and voluntary poverty instead of GDP growth? A US central banker summed up the problem aptly when he argued that growth is a substitute for economic justice. Politically, it’s a much more difficult challenge to distribute what we have more fairly than to deny climate change and exploit the environment.

A ‘Just Transition’ for Europe

So the question emerges: can economic justice be a substitute for growth? An economic transformation demands bold policies – namely, reductions in the wealth held by the richest, the elimination of rising income inequality, and useful rather than precarious forms of employment.

This requires more than just defining goals. It calls for European legislation with ambitious measures for all sectors. One thing is already clear: even the EU Commission’s vision for 2030 (a reduction of greenhouse gas emissions by 50 per cent) is not enough to meet the Paris climate objectives. The European Trade Union Confederation proposes a reduction in greenhouse gas emissions by 55 per cent by 2030, while the German Trade Union Confederation calls for a 40 per cent increase in energy efficiency by 2030 throughout the EU.

However, such ambitious goals also need to be accompanied by a ‘Just Transition.’ The two pillars of climate protection and social compatibility must stand side by side. The prerequisites are security of supply; affordable energy prices; and sustainable industrial policy based on innovation and investment, instead of European de-industrialisation.

In order to accomplish this, the public sector must be provided with sufficient financial resources. In its ‘Cleaner Planet for All’ vision, the European Commission states that 2.8 per cent of GDP must be invested to achieve a climate-neutral economy. That amounts to around €520 to 575bn annually. The European Court of Auditors estimates that in order to achieve the EU 2030 targets, around €1,115bn of investment will be needed annually between 2020 and 2030, especially in the transport, housing, and service sectors. Such investments cannot be realized with a ‘business as usual’ agenda. Accordingly, the European Trade Union Confederation is calling on the European Council to set up a climate-finance pact that will allow massive investment in energy-efficient building renovation, the rail network, and alternative energy.

This can only be achieved if the revenue side improves and the wealthy share in the costs of the transformation: through the introduction of a financial transaction tax, and the fight against tax loopholes and tax havens in order to make global enterprises subject to tax liability and to reduce inequalities. According to estimates by the European Parliament, the public sector loses €50 to 70bn a year, and it might even be up to €190bn. The introduction of a digital tax and minimum tax base constitute innovative approaches that provide for taxing the sales turnover of the platform economy, since until now, that is where the point of connection to the physical existence in a country has been lacking.

All of these measures require one thing: an ambitious European strategy based on obligatory targets that must be met in the near future. National initiatives for fair and climate-neutral economic transformation fall short. Denying climate change, à la US President Trump – who has pulled out of the Paris Agreement– or arguing, as Brazilian President Bolsonaro does, for the deforestation of the rainforest amounts to deliberately destroying the future.

With his EU citizenship ending, it’s not the passport Paul Mason worries about. It’s the values it was supposed to represent 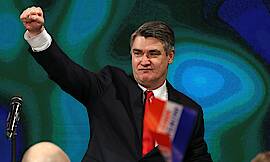 A normal president for Croatia?

'We have to remain sceptical'