Read this interview in German.

When the Cold War ended almost 30 years ago, many assumed the spread of democracy would result in a flourishing of liberal values: equality for all, freedom of expression, free and fair elections, and a clear separation between lawmakers and the courts. The political scientist Francis Fukuyama famously announced ‘The End of History’, meaning that once previously closed societies saw the benefits of Western liberal democracy – in his view the apogee of human political development – there would be no turning back.

Fast forward to 2018 and the optimism of those early years seems remarkably naive. In his new book ‘The People vs Democracy’, political theorist Yascha Mounk focuses on the rise of so-called illiberal democracies – societies that choose their leaders at the ballot box, but refuse to subscribe to liberal norms. Examples are Poland under the nationalist Law and Justice party, which has attempted to replace independent judges with yes men, and Turkey, where President Erdogan has won for himself almost dictatorial powers and imprisoned thousands of soldiers, police officers, journalists and academics.

But democracy is also under threat in Western Europe and America, where, thanks to Donald Trump’s election, populism has gone mainstream.

Yascha Mounk spoke to Michael Broening about the rise of populist movements and how progressives should respond.

In your book, ‘The People vs. Democracy’, you warn that liberal democracy is under threat. Why is that?

When we try and understand our political system, we generally assume we’re talking about a liberal democracy. That means, first of all, that people are allowed to determine the direction of their lives. It means preserving the rule of law and respecting the separation of powers (keeping lawmakers, civil servants and judges independent of each other). And secondly, the system has to be democratic. People’s opinions get translated into policy.

I get the impression these two elements are drifting apart. We’re seeing the rise of an undemocratic liberalism in which money plays an ever greater role in politics. More and more decisions are being taken out of the democratic debate, by institutions ranging from courts to central banks.

Partly in response to this, we’re seeing the emergence of an authoritarian populism, often leading to a system of democracy where people don’t enjoy so many rights. In this kind of system, the populist leader may well be quite popular, because he implements into policy a lot of what people actually want. But at the same time, minorities are ignored or repressed, the rule of law is undermined, and there’s no longer a proper separation of powers.

So is this the reason for the rise of populist parties in Europe?

That’s part of the reason. But there are also long-term factors. In every country, people are point to their own political history to explain the appeal of populists. So in Germany, people say the far-right AfD got so many votes because people find Chancellor Angela Merkel too moderate. But in the United States, people say Donald Trump got elected because the Republican party was already so extreme. Both can’t be true at the same time.

So for me it’s about several different factors at work in a number of countries. One of these factors is that quality of life has stagnated for most citizens. Unlike the post-war era, people in many countries today no longer feel better off than their parents.

Secondly, the unprecedented transformation of mono-ethnic, monocultural societies into multi-ethnic ones has been lengthy and difficult. And thirdly, there’s the rise of the internet and social media. People who don’t trust the system, who don’t want to recognise people of a different skin colour or culture as equals, find it much easier to spread hate and organise themselves politically.

When mainstream politicians talk about why this populist revolt is happening, they often give answers that suit their own political agenda. Left-wingers say it’s the economy; right-wingers say it’s down to liberal refugee and immigration policies. Isn’t this just cherry picking?

Yes. And the reasons they give are different for each country. In the US, many on the left cite racism alone as the reason Trump got elected – so they’re looking mainly at cultural factors. In Germany, the left insists that integration isn’t the problem, so it focuses on economic factors. So the question of who picks which cherry is more complicated than it may seem.

But what everyone has in common is that they don’t base their solutions on factual analysis, but on their existing policy positions.

You’ve talked about a number of factors behind the populist rise. What would you do to address the root causes?

No single policy will be able to solve the crisis of democracy overnight. In my book I argue that democracy’s already in an advanced stage of decay. So I can’t promise a happy ending.

For me, one answer is to create policies that tangibly increase people’s standard of living, and enable them to feel in control of their lives.

The Brexiteers’ slogan was ‘Take back control’. That’s what people really want. They miss that feeling of having control over their lives, and their nation has control over its fate in an age of globalisation.

We can foster this sense of control in a lot more of our economic policies. For example, that rich people will be forced to pay their taxes even if they spend 200 days a year lying on a beach in the Bahamas. We can do much more to make sure that companies that want to do business in Germany, say, pay a fair share of tax there, regardless of whether their nominal head office is in Dublin, Delaware or Berlin.

We can increase people’s productivity by investing in training, not just when they lose their jobs, but ongoing. By keeping rents and city living affordable, we’ll ensure more is left over from people’s pay packets for the things in life they actually enjoy.

Have the US Democrats learned any lessons from Trump’s victory?

Yes and no. The Democrats are coming up with some decent economic policies. However, the American political system means these policies can be vetoed by any number of groups. Big companies have a heck of a lot of influence here, so it won’t be easy to enforce more progressive policies.

In one respect the United States has an advantage over Germany: lots of people on the left realise that we can’t give the right a monopoly on patriotism and nationalism. Progressives need to understand what nationalism means in context. It’s a positive thing when people from the same country act in solidarity with one another. But it is important that within this national grouping, we include people of different skin colours and religions who live in the same country.

The counterargument is of course that when ‘progressive’ parties have tried to mimic the rhetoric or policies of the far-right, people vote for the ‘original’ right-wingers anyway.

Well, we shouldn’t be chasing after the right. What we need to do, however, is understand what patriotism means in an equal, liberal society.

I sometimes quote a speech Emmanuel Macron made during the French election campaign. He looked into the audience and said, ‘I see people from Mali and Ivory Coast and Italy and Poland. But what do I see? I see the people of Marseille. What do I see? I see the French people. Look, Ladies and Gentlemen of the National Front: That’s what it looks like when you’re proud to be French.’

Did Macron mimic the National Front? No. He was giving them a more positive model of national pride.

Yascha Mounk is a lecturer on Political Theory at Harvard University's Government Department, a Postdoctoral Fellow at the Transatlantic Academy of the German Marshall Fund, and a Nonresident Fellow at New America's Political Reform Program. He is now mainly working on the crisis of liberal democracy. Yascha Mounk regularly writes about European and U.S. politics for publications including the New York Times, the Wall Street Journal, Die Zeit and the Frankfurter Allgemeine Zeitung.

Yascha Mounk is a lecturer on Political Theory at Harvard University's Government Department, a Postdoctoral Fellow at the Transatlantic Academy of the German Marshall Fund, and a Nonresident Fellow at New America's Political Reform Program. He is now mainly working on the crisis of liberal democracy. Yascha Mounk regularly writes about European and U.S. politics for publications including the New York Times, the Wall Street Journal, Die Zeit and the Frankfurter Allgemeine Zeitung.

Pursuing greater multilateral cooperation and an equitable recovery is not just about kindness; it is in the self-interest of rich countries 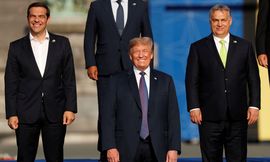 Why the term ‘populism’ is harmful

‘Populism’ is being defined far too simplistically. This is not just an academic lapse, but a tangible problem for democracy and political discourse

We pay an ugly cost for ads on Twitter

Distracted by Elon Musk’s Twitter takeover and behaviour, most have forgotten what issues are really at stake in the social media sphere

‘Profits must be shared’

As inflation rises, it is surprising that some are making enormous profits. To restore social balance the EU must push for an excess profit tax

A looming famine in Lebanon