At a time when the world is busy dealing with the challenges of the Covid-19 pandemic, other issues tend to get put on the backburner. In Mali, Covid-19 is just one challenge among many that the population, government and international actors have to tackle on a daily basis. But how is to be confronted with these issues in the middle of a worldwide pandemic?

The picture on the dusty streets of Bamako is the ambivalent answer to this question. Although the Malian government quickly implemented initial measures against the pandemic, including a night curfew, for the majority of the population life goes on much as before.

While around the world many processes appear to have ground to a halt, Mali has even been able to hold its long-delayed parliamentary election. Originally scheduled for 2018, it was repeatedly deferred because of the country’s unstable security situation. But there was growing pressure on the Malian government to go ahead. Once the ‘national inclusive dialogue’, which took place in December 2019 as part of the country’s internal process of reconciliation, recommended in its final document that legislative elections be held, they could be put off no longer. And so, at the beginning of the year, President Ibrahim Boubacar Keïta (generally known in Mali as IBK) announced that both rounds of the parliamentary election would take place in March and April 2020.

At the time of IBK‘s announcement, corona had only really featured in fringe news items in the international media about a new virus in Asia; how dramatically the situation would change in a few short months was something not only Mali could have never imagined.

At the end of March, just a few days before the first round of the parliamentary election, Mali’s first case of Covid-19 was confirmed. The Malian government had already declared a ban on public gatherings as a precautionary measure. In this situation, the election campaign, as far as it can be called one, was a quiet affair.

Yet, the (official) average voter turnout of 35.25 per cent was roughly the same as in 2013. The reliability of this figure must be called into question, however. The figures issued by the government on the individual regions show irregularities and election observers too estimated the voter turnout to be much lower than the government figure led us to believe.

After the announcement of the official results of the second round there was slight unrest in several of the country’s regions. This was sparked by the constitutional court exerting influence over the results. According to Malian law, not only does the constitutional court have the right to confirm the final results but also to substantially ‘adjust’ those results if it deems this necessary. This is nothing new but the process was never as noticeable in previous elections. In the days following the announcement of the official results, young people in particular aired their discontent on the streets. In response to the unrest, the constitutional court was forced to look at the results again. Nevertheless, it announced shortly afterwards that no changes would be made.

An overwhelming majority of Malian parties revolve around their party leaders and functionaries. If they even have a party platform, it is very malleable and shaped by political opportunism.

Over a month after the official results are out, there's still a potential for further protests, which originally came from the seemingly flawed election results. On 5 June an estimate of 20.000 Malians demonstrated in the streets of Bamako against the regime. Those protests were led by Imam Dicko, a powerful figure in Malian politics. Dicko, former President of the Malian Islamic High Council, supported IBK in his first term but became increasingly critical since then. So far an official reaction by the Malian Government regarding the protests is still pending. A restless feeling within the population can still be felt, but if it will result in further demonstrations or other acts of defiance against the government is not clear in the moment.

The president’s governing party, the Rassemblement pour le Mali (Rally for Mali, RPM) ultimately took 51 of the 147 possible seats in parliament. RPM was followed by the Alliance pour la Démocratie en Mali-Parti Pan-Africain pour la Liberté, la Solidarité et la Justice (ADEMA-PASJ) with 24 seats and the Union pour la République et la Démocratie (URD) with 19 seats. RPM and ADEMA-PASJ can be broadly classified as parties on the left of the political spectrum, whereas the URD identifies itself as ‘liberal’.

This ideological positioning of the Malian political parties is only partially accurate, however. An overwhelming majority of Malian parties revolve around their party leaders and functionaries. If they even have a party platform, it is very malleable and shaped by political opportunism. One positive aspect that deserves mentioning is that there are 41 women in the new parliament, which represents a significant increase compared to the 14 in the previous legislative period.

Kidnappings and other problems

However, the 2020 parliamentary election was overshadowed by an event that happened a few days before the first round. The leader of the opposition and prominent political personality Soumaïla Cissé (URD) was kidnapped during an election campaign visit to his constituency in central Mali. Along with several members of his entourage, Cissé disappeared and has not been seen since. While the other members of his team have since been released, there is still no sign of Cissé. It is also not entirely clear who the kidnappers are. Although it is assumed that the Islamist terrorist organisation Jama'at Nasr al-Islam wal Muslimin (JNIM) led by Iyad Ag Ghali is behind the kidnapping, there has been no official statement confirming this. If JNIM is responsible, this would be a major blow for advocates of negotiations with this West African offshoot of Al-Qaida.

The assumption is that ransom money was paid for the release of the members of Cissé’s entourage. This process not only shows just how vulnerable many, if not all government actors in Mali really are, but also that the Malian state itself is open to blackmail. This could be a fatal move for future negotiations with armed groups like JNIM but also for the stability of the state.

At the end of the day, although Covid-19 will leave its mark on Mali, the virus will be recorded in the annals of history as just one of many challenges the country faced in 2020.

The outlook when it comes to the security situation in Mali seems just as bleak. Both in central Mali and in the north of the country violent attacks are a daily occurrence. Particularly in the border region with Niger and Burkina Faso, incidents are becoming increasingly serious. We are also regularly seeing inter-community conflicts between sedentary farmers and the more nomadic cattle breeders.

In light of all this, the Covid-19 situation plays a secondary role. Although forces like IS and Al-Qaida have tried to portray the virus as ‘punishment for the infidels’, so far, this has not noticeably impacted the intensity of their attacks and activities in the region, either positively or negatively. In fact, recently, growing confrontation has been observed between the two extremist groups. The main reason appears to be the willingness expressed by some parts of Al-Qaida to enter into negotiations with the Malian state.

One final aspect of the Malian kaleidoscope of crisis, security and normality comprises the international missions currently operating on the ground. Besides the UN Mission MINUSMA and the European Training Mission EUTM, the extension of which is currently being discussed in the Bundestag, there is also the French anti-insurgent operation Barkhane, the G5 Sahel troops (Mauritania, Mali, Niger, Burkina Faso and Chad), the European Union Capacity Building Mission EUCAP and a whole range of bilateral initiatives with Malian partners, all of which play a key role.

Here the impact of Covid-19 is perhaps at its most dramatic. After the first cases of the virus within Mali, the majority of the international training staff of EUCAP left the country, to reduce potential exposure for the mission and partners. In light of the increased number of cases in Mali and within the mission, EUTM suspended its training programme. While many of the civilian elements of MINUSMA have left the country, the military elements remain on the ground. But there are problems here too. After the camps in Gao and Timbuktu reported cases of the virus, they were placed in two-week quarantine. In some cases it was impossible to carry out the customary rotation of military units or, as with the German soldiers, could only happen with long periods of quarantine. This has had a major impact on some parts of the mission’s overall operation. But MINUSMA continues to do everything within its powers to fulfil its duties to the best of its abilities even under these circumstances.

And this is absolutely vital. Because of the poorly trained and under-equipped Malian armed forces, international engagement is imperative to maintain a minimum level of security. In many cases, without the deployment of these military forces, it would be impossible for civil society and humanitarian work to be conducted on the ground.

This way of working aims to secure the necessary peace and stability in Mali and the whole region. Although MINUSMA, already in its seventh year, has drawn some sobering conclusions about how bad the situation is, the general consensus among analysists and experts in the region is that, without international engagement, things would be even more serious. That said, a critical assessment of the missions and potentially an overhaul of their mandate is needed.

To some extent, the operations lack joint European coordination, sometimes do not pay enough heed to the role of civil society actors or fail to hold the Malian government to account over its promises. The German government, for example, has been supporting the Malian reform process in the security sector through the ‘empowerment initiative’ for several years now, but the Malian side has not really pushed through any of the proposed reforms. Political pressure from the German side could change this. Given that overcoming these challenges is likely to be a long-haul process, it is essential that these shortcomings of the missions and initiatives are addressed.

At the end of the day, although Covid-19 will leave its mark on Mali, the virus will be recorded in the annals of history as just one of many challenges the country faced in 2020. For many Malians, even in these strange times, it’s business as usual, for better or for worse.

Christian Klatt is a political scientist and the Resident Representative of the Friedrich-Ebert-Stiftung in Mali. 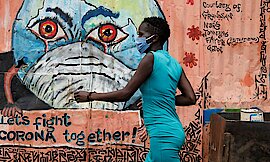 At the onset of the pandemic, it was feared Covid-19 could reach catastrophic levels in Africa — but the numbers remain low

A wake-up call for Africa?

Africa’s governments and their partners must not stop at fighting Covid-19. The continent needs a new economic model 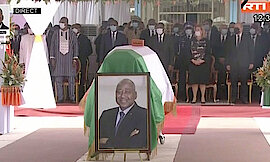 A heated time for Côte d’Ivoire 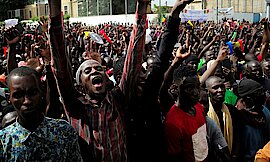 The confrontation between the government and a broad protest movement is escalating. And there's no solution in sight 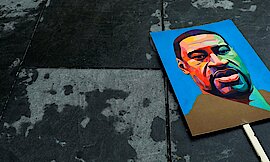 After independence, Nigeria championed the cause of black people everywhere. So why did it remain silent after the murder of George Floyd?