For months, East Africa has been hit by a disaster that eclipses all the others: it’s not the Covid-10 pandemic, but huge swarms of desert locusts stripping bare entire swathes of land in nine countries and Yemen. According to Dr Tobias Takavarasha, the United Nations Food and Agricultural Organization (FAO) representative to Kenya, ‘It is a big threat. It is the biggest threat. Much as we say drought is a threat, […] that floods can be a threat, […] they are all threats. [And] the desert locust situation is [also] an unprecedented threat [to] food security.’ This was his assessment in late February.

Since then, yet another peril has arrived in East Africa: the coronavirus. The case number is still low, but governments in the region know that a major outbreak would overwhelm their weak healthcare systems far more quickly than those in Italy, Spain or the US. All East African states thus reacted to the first confirmations of Covid-19 by immediately introducing strict measures to limit its spread.

In Kenya, which had 31 cases on 27 March at 10am local time, all international flights were suspended and schools and universities closed. That same day, a nightly curfew was imposed for an indefinite period. Kenyans fear the economic consequences of the corona crisis as least as much as the virus itself. In late March, President Uhuru Kenyatta announced various degrees of tax relief for different professional groups. Some members of government have waived large parts of their salaries, with Kenyatta and Deputy President William Ruto voluntarily forgoing 80 per cent.

The loss of tax revenue will further burden the Kenyan economy. Although Kenya is the region’s economic powerhouse, it verges on over-indebtedness. In June 2019 – before the arrival of locusts and coronavirus – some 60 per cent of the country’s gross domestic product went to servicing debt. Simultaneously battling a pandemic and a plague of locusts seriously hurts its economy.

Swarms as large as cities

East Africa’s current invasion of locusts is the worst in 25 years. In Kenya, it’s been 70 years since these flying insects caused such devastation. According to the FAO, an average swarm consisting of 40 million locusts can fly 150 kilometres a day and consume as much food as 35,000 people eat in a day. Desert locusts have already destroyed tens of thousands of hectares of crops, with Kenya, Ethiopia and Somalia amongst the countries most affected.

Kenyan authorities say that in the most severely hit counties, the predatory insects have ravaged around 5,000 square kilometres, destroying millet, maize, rice, coffee shrubs, vegetables and fruits. They have also stripped grazing grounds, leaving nothing for cattle to forage. Not only are crop failures catastrophic for farmers, they also hurt Kenya’s economy. In 2019, agriculture contributed a good quarter of the country’s gross domestic product. Tea, fruits, vegetables and flowers are Kenya’s leading export goods. This plague of locusts thus threatens to reduce the country’s foreign exchange earnings.

The teams working to eradicate the locusts have to act quickly – under the greater challenges created by the corona crisis.

And the scourge is far from over: The FAO considers the situation ‘extremely alarming’: Ideal breeding conditions make it possible for desert locusts to multiply up to 400 times by June. Even without them, nearly 12 million people cannot eat their fill because droughts and floods have alternated over many years, hitting farmers and cattle breeders with one catastrophe after another. In Somalia and Yemen, long years of armed conflict compound the problem.

A race against time

Regional governments, the FAO, aid organisations and the population are racing against time because the first generation of locusts laid eggs in the ground that are now hatching the next one. Since young insects cannot fly, this is the best time to fight them. If the locusts aren’t eradicated now, the UN anticipates that famine, too, will beset East Africa. This is because the planting season is fast approaching. For crops to flourish, the rainy season, which should start any day now, has to begin on time. But planting will likely coincide with the next generation of locusts hatching – who will gobble up the crops as quickly as they are planted.

The teams working to eradicate the locusts have to act quickly – under the greater challenges created by the corona crisis. Worldwide, international borders have been closed, preventing international experts travelling to the region and delaying pesticide deliveries.

Nevertheless, regional governments, the FAO, international aid organisations and East Africans themselves have been active in recent weeks, says Cyril Ferrand, the FAO’s Eastern Africa Resilience Team Leader. In the second week of February, the FAO placed many orders for equipment and pesticides. Normally such deliveries take about four weeks. This time, however, despite delays caused by the extraordinary situation, much has already arrived, including five extra agricultural aircraft and their crews, as well as equipment for spraying from the ground.

But coronavirus has created yet another obstacle: Because the surveillance helicopter pilots come from South Africa, they have to go into 14-day quarantine after entering Kenya and Ethiopia. This postpones their ability to monitor the swarms. Just how successful fighting the plague of locusts can be under these circumstances remains to be seen.

One thing, however, is certain: The governments of Kenya and other East African countries will not be able to bear the economic burden created by the plague of locusts and the corona crisis alone. They will need financial help – whether or not industrialised countries have their own economic crises.

Bettina Rühl is a freelance journalist based in Nairobi and Cologne who has been writing about Africa for over 20 years. Her reports, which focus on how big political decisions and upheaval on the continent affect ordinary Africans, have been featured on German public TV and radio, as well as in newspapers including the Berliner Zeitung and the Tageszeitung. 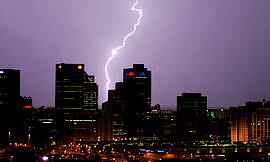 A wake-up call for Africa?

Africa’s governments and their partners must not stop at fighting Covid-19. The continent needs a new economic model

Pay attention to the Global South!

While large stimulus packages are launched in the Global North, austerity and inequality amplify social conflict in the South 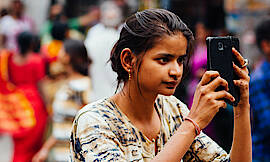 Does digitalisation drive future-proof development for the Global South? A closer look fuels doubt about too much optimism 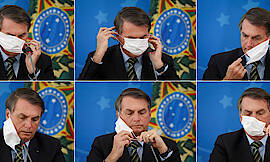 Could Bolsonaro profit from Covid-19?

Brazil's President Jair Bolsonaro looks severely weakened. Yet the corona crisis could actually end up working in his favour

The curse of the Caribbean

No region depends more on tourism than the Caribbean. Now, during the corona crisis, it’s deserted and vulnerable