Environmental problems are almost always social problems, too. The rich and super-rich who live in exclusive districts and gated communities and jet off to the last untouched island paradises for the weekend can still afford to escape from the destruction of the biosphere for the time being. Average earners don't have this opportunity. They need clean air and drinking water, tolerable levels of noise pollution, and reliable access to parks and recreational facilities, public communication areas and a functioning public-transport system.

Although it may occasionally seem like environmental issues are a fashionable fad of the privileged middle classes, it is mainly ‘ordinary people’ who benefit from eco-social transformation. Their quality of life is heavily dependent on the availability of public goods: if, and only if, the social costs that accompany every change are identified early on, given due consideration and distributed fairly.

European social democrats have long cared about environmental problems as well as social ones. At least that's what it says in their manifestos. But in practice, they have too often failed to come up with truly progressive, joined-up policies on these two big issues. That’s why, when it comes to the major environmental conflict lines such as energy and transport policy, social democracy and trade unions often seem hesitant, sometimes even obstructive, in their approach to the environmental transformation that most of the population have long regarded as essential. And the Greens, who call for an end to coal-based power generation and a ban on cars in big cities, are benefiting from this because voters regard them as more courageous and consistent.

Yet social democratic policy must amount to more than ‘no more coal, no more cars in our cities’. Social democrats must also ensure that those who work in mining and coal-based power generation, and in the automotive and supply industries, do not hit rock bottom. The same applies to the large community of small farmers when it comes to the transformation of agriculture, which is now unavoidable for environmental reasons.

You can't blame the social democrats for bearing in mind the social consequences of environmental transformation and that, therefore, they are wary of simplistic answers. But you can certainly blame them for not instigating the essential restructuring in these sectors much sooner in order to bring about a smoother and less costly social transition.

It is now clear that the old growth-oriented concept of progress is no longer viable. Climate change is the writing on the wall that should also jolt social democrats into action. But was the old concept of progress really a convincing and sound basis for social democratic policy in the past? Back in 1975, in his book Social Limits to Growth, the American economist Fred Hirsch pointed out the distribution-related aspects of conventional progress.

The eco-social transformation presents social democrats with what may be their last big opportunity.

In his view, with positional goods accounting for an ever larger proportion of consumption, most consumers face an increasingly fruitless chase for gratification as they attempt to catch up with the consumption pioneers. After all, the very point of these positional goods is that they are in some way exclusive.

A few simple examples illustrate this: when even average earners can finally afford a cottage in the country, they no longer live near the urban cultural centre and have a view of the meadow; they are instead in an endless agglomeration of cottages. When blue-collar and white-collar workers can afford their own four wheels, these wheels are increasingly at a standstill, as the roads are usually congested in the morning and evening rush hour and at the beginning and end of the holidays. As Fred Hirsch laconically puts it: ‘If everyone stands on tiptoe, no one sees better.’

The eco-social transformation is a left-wing topic

In fact, a great deal of modern consumption is based on a competition for status, with very few winners. That is why the argument often heard among social democrats in particular, that economic growth must always be maintained so that ordinary people can eventually enjoy what today is exclusively the preserve of the rich, is fatally flawed. The vast majority cannot improve their situation in life through status-driven consumption; they can only win if they shape their living and working environment in line with their needs through common political efforts.

Ultimately, the socio-environmental transformation also proves to be a defining moment of a lasting peace policy. Only a radical increase in energy and material efficiency and the development of an environmental recycling economy can prevent what currently seems like an imminent era of ruinous wars over resources. With their Ostpolitik and policy of détente, the German politicians Willy Brandt and Egon Bahr saved the 20th-century world from a major new war and possible nuclear catastrophe. In the changed circumstances of the 21st century, a new attempt at a peace policy, based on energetic steps to resolve the environmental question, would be needed.

The eco-social transformation presents social democrats with what may be their last big opportunity. If they realise that the all-prevailing topic of the environment is essentially a left-wing topic and therefore in their territory, they can again become a major force for political change – in Germany, in Europe and maybe even beyond. But if social democrats stick to half measures and fail to link their traditional focus on equal freedom for all to environmental issues, they could actually disappear on a long-term basis as a serious political force.

Prof Dr Johano Strasser is a political scientist and writer. He has published numerous non-fiction books, novels, radio plays, plays and poetry. From 1995 onwards, he was Secretary-General and later President of the German Centre of P.E.N. 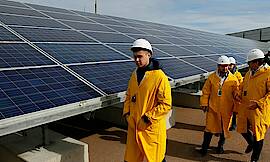 An energy transition across South East and Eastern Europe would bring security, economic growth and peace to the region 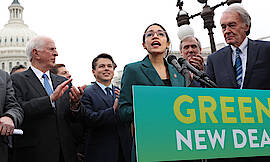 The case for green realism

We need to be honest: the transition to a carbon-neutral economy will make us worse off before it makes us better off