The recent revelation that the remains of 215 Indigenous children, some as young as three, were found in an unmarked mass grave in the Canadian province of British Columbia has shaken many Canadians, triggered deep grief in Indigenous communities, and torn open a new debate about Canada’s past and present colonial policies.

This most recent discovery is the culmination of decades of work by the local Tk’emlups te Secwepemc First Nation, who used ground-penetrating radar to locate the children’s remains at the Kamloops Residential School. They are now working with police and the local coroner’s office to further document the site, and sadly, expect to find more bodies as the work continues.

Today, Indigenous people in Canada are strong and vibrant communities of over 1.4 million, representing more than 50 nations and distinct languages across the country. But since the earliest days of exploration and British rule, Canadian government policy has systematically sought to disenfranchise, dispossess and erase Indigenous peoples from Canada.

To understand this tragedy, it’s important then to grasp the depth of Canada’s ongoing colonial project. There is broad recognition of Canada’s ‘colonial past’ by the Canadian government, and one of its most prominent features is the residential school system. From 1883 to 1996, more than 150,000 Indigenous children were taken from their families and forced to attend state and church-run residential schools, often far from their home communities.

Residential schools rarely if ever provided useful education, and instead served as a place to ‘kill the Indian in the child’. Children were banned from speaking their languages or practicing their culture, and frequently faced violence, sexual abuse, starvation and other horrors. Disease was widespread in the under-funded institutions, killing thousands of the children who were forced to attend. Many simply disappeared, and their families were never notified or given bodies to bury.

The real test of what the discovery of these 215 children’s remains means will come long after the flags leave their half-mast position.

In 2015, a national Truth and Reconciliation Commission with a mandate to document the history of the schools heard from almost 7,000 witnesses and confirmed that the system was a form of cultural genocide. These findings were widely accepted by the Canadian government. But little follow-up action has been taken to repair the deep harms caused by the residential school system. The Commission also called for an apology from the Pope, as the majority of the schools were run by the Catholic church – an apology that has never come.

The tragedy of so many children’s needless deaths has rocked the country. The existence of the mass grave has also underscored how little the full impact of residential schools has been understood by non-Indigenous Canadians. For years, residential school survivors have spoken of seeing children killed or buried, and the existence of undocumented burial sites are often well-known within Indigenous communities. The revelation about the children killed at the Kamloops Residential School – at just one school of more than 130 that operated across Canada – will not be the last, and it has given non-Indigenous Canadians a small window into the deep horror, intergenerational trauma and community grief left behind by decades of racist government policy.

As many Indigenous people have noted, 1996 (the year the last residential school closed) is not the distant past. Canada’s colonial history is ongoing, in the form of child welfare policies that continue to separate families, provide inadequate housing, tolerate lack of clean drinking water on reserves, enable persistent wealth inequality, pursue high rates of incarceration and poor health outcomes faced by Indigenous people. It is colonial policies that have allowed mercury to poison an Indigenous community for half a century, and Canada’s lack of action on climate change is impacting Indigenous communities first, especially those that rely on traditional wild food sources.

There are signs that the tragic discovery in Kamloops may be the beginning of a messy, but much-needed, reckoning: the House of Commons recently adopted a motion put forward by the social democrats (NDP) to end the government’s controversial legal challenge of two court rulings involving Indigenous children torn from their families by a chronically underfunded child welfare system, though it remains to be seen whether Justin Trudeau’s Liberal government will feel bound to honour it. Institutions are re-considering the veneration of the founding fathers of Canada’s residential school system, and where they are slow to act, some Canadians are forcing change by bringing down their statues.

The real test of what the discovery of these 215 children’s remains means will come long after the flags leave their half-mast position. It will mean delivering truth and justice to the families and communities who lost children in this unthinkable way. It will also require deep and uncomfortable work for non-Indigenous Canadians, and real change in the colonial government policies that are continuing to harm Indigenous communities.

The beginning of the end for Viktor Orbán?

The conservative small-town mayor Péter Márki-Zay has won the primary of Hungary's united opposition. And he has a good chance of beating Orbán 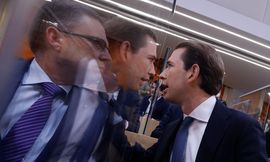 The radicalisation of Austrian conservatism

Sebastian Kurz resigned after a series of major scandals. But he still wields power over the Conservatives that radicalised under his leadership

After Czechia's vote, it all comes down to the president

Andrej Babiš’s right-wing populist ANO party lost ground in the Czech elections. But Babiš may still have an ace up his sleeve: President Miloš Zeman

The Pandora Papers and the threat to democracy

Property laws have long been written by and for the wealthy. But the more they insist that their actions are legal, the less the public trusts the law

'Once you get left behind in the space age, you’re never catching up'

Space governance expert Timiebi Aganaba on billionaires in space, parallels with colonialism on earth, and the future space economy

Hydrogen is necessary to achieve Europe's climate goals. But this requires co-operation with countries like Russia and China, says Rainer Quitzow

The beginning of the end for Viktor Orbán?

The conservative small-town mayor Péter Márki-Zay has won the primary of Hungary's united opposition. And he has a good chance of beating Orbán

The revolt of the American worker