In June, Japan passed a controversial bill allowing authorities to target terror plots, popularly known as the “conspiracy law”. The law gives the police wide-ranging powers to investigate not only crimes committed, but also the mere discussion of plans to commit a crime. A total of 277 acts are treated as crimes, including terrorism, but also lesser offences such as illegal mushroom picking in conservation forests and using forged stamps. An entire group can be convicted of a crime, even if only one member of that group is found to have committed it.

The current government claims the law is needed to fight terrorism ahead of the 2020 Tokyo Olympics. Opponents say it curtails civil liberties and could enable the government to spy on innocent civilians.

Sven Saaler discussed the controversial law with Shôichi Kondô, member of Japan’s lower house and chair and co-founder of the non-partisan Constitutional Forum.

Mr Kondō, as the representative of the Constitutional Forum, you strongly opposed 2013’s State Secrecy Law and security legislation passed in 2015. The current anti-conspiracy law seems to run along similar lines, giving the state more powers and infringing upon civil liberties. What is Prime Minister Abe’s administration hoping to achieve with this new law?

I think Prime Minister Abe wants to return to the days of his grandfather – former prime minister Nobusuke Kishi – and return Japan to its “former glory”, meaning the days of Empire under a military leadership whose stated aim was to “enrich the state and strengthen the military”.

He wants to revise the constitution to reflect this, but he’ll find it very difficult to alter it completely. In 2015, he passed new security legislation which enabled him to de facto revise our constitution, giving more power to the state. The Japanese people, 72 years after the war and 70 years after the enactment of the constitution, have a strong love of peace, and so the nation will not return to that bygone era entirely, but if the constitution is amended—if Article 9 [which renounces the “threat or use of force to resolve international conflicts”] is jeopardised—then Japan will not be the same country.

There’s also the worry that Japan will become a major military power again. Do you think that’s likely to happen?

Japan will probably not become a military power for the time being, but there will be a push to strengthen Japan’s military as it tries to deal with regional disputes and the tense situation on the Korean peninsula. I don’t think that with our strong economic position there’s a realistic chance of us actually going to war, but Abe wants to increase our military strength; he wants us to be stronger than our opponents, and he thinks we need to be able to fight some sort of war if necessary.

By billing the law an anti-terrorism measure, the government is hoping to convince sceptical citizens that it’s necessary. Do you think the law is really about combatting terror?

The full name of the bill is the “Act on Punishment of the Preparation of Acts of Terrorism and Other Organised Crimes”. Recent terrorist attacks around the world, plus the fact Tokyo is hosting the Olympics in 2020, are both reasons the law has been billed as a countermeasure to terrorism.

Most people will think, “It won’t happen to me,” and so it’s difficult to convince them of the dangers of the anti-conspiracy law.

People increasingly see the phrase “conspiracy to commit terrorism” and think there’s no other option. There was a time when people knew those who’d been taken away by the police during the war and the days of the Japanese Empire, but we’re in a different era now. When we politicians heard that a surveillance camera had been placed in a trade union office during last year’s House of Councillors election, it sounded somewhat familiar. But for most people, this kind of thing doesn’t really strike home. They may have some concerns, but they haven’t had that visceral experience. Most people will think, “It won’t happen to me,” and so it’s difficult to convince them of the dangers of the anti-conspiracy law.

The bill failed to pass three times thanks to the opposition movement, didn’t it?

That was because there were older people in the [ruling] LDP who remembered those times and thought that no good could come of the bill. But now, there aren’t many people from that the wartime generation left in the LDP. Also the meaning of “conspiracy” is difficult to understand. Most people are of the mind that terrorism may happen, that it’s better to prevent it before it happens, that to prevent it we need to arrest bad people, and that we need to investigate what bad people are doing. So it’s hard for people to get a real sense of how surveillance violates their rights, or even that the goal might not just be to arrest “the bad guys” but also people who oppose the government.

How will the anti-conspiracy bill, if enacted, affect civil society groups and their right to protest?

There’s a precedent for this. In 1971, a journalist from the daily Mainichi Shimbun exposed a secret pact between the US and Japan concerning the return of Okinawa. Initially he was lionised. But later his love affair with the official who handed him the information was made public, and the Mainichi Shimbun’s reputation suffered so much it went temporarily bankrupt.

Pre-emptive investigations would encourage people to keep quiet because they fear their personal information will be made public and used to smear them or their family.

Although not part of the anti-conspiracy law, the wiretapping law allows for the interception of communications, and I think the anti-conspiracy law will make it easier to loosen the regulations. Right now, you need to get a court order to listen in to other people’s conversations. But you no longer need a telecoms employee listening in alongside, which used to be a requirement.

What’s more, Japan still has a system of police custody that often leads to harsh interrogations and false charges based on forced confessions. The anti-conspiracy law will make this kind of thing easier.

Despite the fact this anti-conspiracy law is highly controversial, Abe’s administration remains popular. Why is that?

Firstly, although many people in Japan now value pluralism in politics, there is still a large section of society that wants a strong leader and a stable government in Japan, which they hope will end the current economic stagnation. Despite difficulties in the economy, Abe is prepared to finance public services with debt, which at least gives the semblance of a buoyant economy. The government has approved a raft of new infrastructure projects, and small businesses also seem optimistic. That’s not to say, though, that the economy is flourishing: if you look at the numbers, wages are falling substantially and working hours are getting longer.

Secondly, as with Mr Trump, Abe’s anti-foreign rhetoric is seen as a kind of strength. Abe often speaks out against what’s happening on the Korean peninsula or in China, while at the same time handing out aid money to poor countries—these kinds of things are perceived as a demonstration of leadership.

Shoichi Kondo is a Member of the House of Representatives of Japan and vice general-secretary of the Democartic Party. After graduating from the Faculty of Law at Sophia University in Tokyo and a period of study abroad at Beijing Language and Culture University, he joined the newspaper company Chûnichi Shinbun in 1984. In 1993, he joined the newly-found party “Sakigake” (Pioneers) and was elected to the House of Representatives in 1996. During the cabinet of Naoto Kan (2010-2011), he was Vice-Minister of the Environment. Currently, he is co-chair of “Zero Nukes Association” (a group of parliamentarians advocating the phasing-out of nuclear power) and the representative of the “Rikken Forum” (Constitutional Forum). 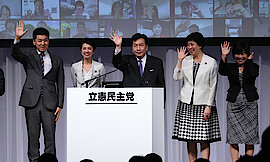 How Japan's Left is repeating its unfortunate history

Like in the 1990s, Japan's centre-left opposition is forging alliances without common principles — leaving it unable to challenge neoliberalism 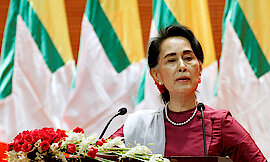 Victory for the Mother of the Nation

With a clever rebranding, de facto prime minister Aung San Suu Kyi and her party have won a landslide in Myanmar's election 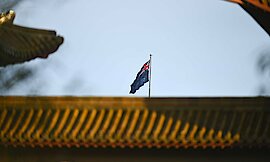 Is Down Under on top of its China policy?

Europe is rethinking its economic and political relationship with China. What it can learn from the Australian experience 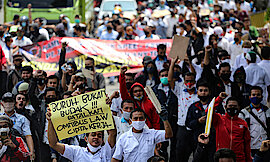 With the passing of the anti-worker Omnibus Law, President Jokowi's administration follows the path of Indonesia's dark past 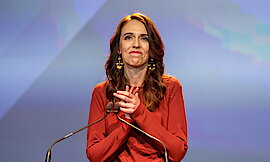