Social democracy in Europe is dead. Or at least in profound distress. You do not need to look as far as Iceland to find social democratic parties with ratings in the single figures. In the Netherlands, the PvdA (Labour Party) is on around the same level, the British Labour Party and the French Socialists are split down the middle, the once proud Spanish PSOE (Spanish Socialist Workers' Party) is scraping 20% and its Greek sister party has almost entirely disappeared.

Why the sudden change in the SPD’s fortunes? According to Germany’s breathless media, it’s all down to one man: Martin Schulz, or “Saint Martin” as the weekly “Spiegel” put it, with only a passing hint of irony. Since the former European Parliament president announced in January his candidacy for Chancellor in the 2017 Bundestag elections, after former SPD chairman Sigmar Gabriel threw in the towel, a fresh wind of optimism has blown through the party. In the two weeks following Schulz’s nomination, the SPD welcomed 5,000 new members and climbed 10% in the polls. No trace of anguish there!

Despite his deep commitment, the brusque yet indecisive Sigmar Gabriel never managed to mobilise support for his party or for himself. He seemed too much the embodiment of the SPD-CDU grand coalition, had too often gone against the majority opinion of his party, such as in his opposition to the TTIP trade deal between the US and EU, and had a knack for polarising the very people he was supposed to bring on side.

Who is Martin Schulz?

In Germany, Schulz bears the nickname “Mr Europe” for his many years working in Brussels. He is charismatic and straight-talking: a refreshing change from the dull career politicians that tend to populate the Bundestag. As a young man, Schulz dreamed of becoming a professional footballer, only to see his hopes dashed by a serious knee injury. He quit school without taking his exams, and turned to alcoholism and depression. In 1980 he went teetotal and started work as an independent bookseller, moving on to become mayor of Würselen, a small town in the far West of Germany.

Schulz’s lack of education has earned him occasional derision in a country obsessed with qualifications – despite speaking five languages fluently. But outside the media and political bubble, his less than perfect CV and openness about his struggles with drink is winning him respect among ordinary Germans. .

Questions also loom large, however. As President of the European Parliament, ought not he to have distanced himself more vehemently from Chancellor Merkel’s austerity policies? Positioning himself on the right wing of his party, will he succeed in forging a clear path for the SPD, distinct from that of Merkel’s CDU? And does Mr Europe have sufficient experience at home to govern on a national level?

One phrase many in the SPD would like to forget is “Agenda 2010”. It refers to a series of welfare and employment reforms implemented by then SPD Chancellor Gerhard Schroeder, including the largest cut to Germany’s social security system since World War II. The reforms provoked heavy opposition from union leaders, some politicians and ordinary Germans alike, and saw the SPD lose half its voters and half its members in protest.

By emphasising values such as social justice and equality, Martin Schulz has drawn a clear line between himself and the old reformist agenda – something Sigmar Gabriel never managed. Policies include an extension of the time older people can claim unemployment benefits, and a strengthening of rules governing unstable, temporary jobs.

What about the populists?

Yet one thing is beyond question: Martin Schulz, as a convinced European and democrat, is the clear antithesis to the clamorous far-right Alternative for Germany (AfD) party that is rapidly gaining ground in Germany’s poorer regions, particularly in the East. It is no coincidence that his first election posters bear the acronym MEGA: Make Europe Great Again, playing on Donald Trump’s well-worn phrase. In placing European solidarity at the top of his agenda, Schulz is openly trumpeting social justice, freedom and openness to the world – in stark contrast to the AfD’s manifesto with its emphasis on closed borders.

Can he beat Merkel?

Merkel’s chancellery is getting nervous. The SPD has accused her party of spreading “baseless rumours” about the former EU big wig, with a document claiming he gave top parliamentary jobs to close friends. But how is Schulz actually likely to fare in a bid for Germany’s top job? Going on polls alone, his chances don’t look great. Current surveys suggest the election on 24 September will bring two more political parties into the German parliament: the right-wing populist AfD and the neo-liberal Free Democratic Party (FDP). That means a strengthening of the right. A “red-red-green” coalition (SPD, Greens and die Linken on the far left) which would make Schulz chancellor thus looks all the more unlikely. The media approval will not last forever and the opinions fluctuate from day to day [link in German] between CDU and SDP on top.

One the other hand, Martin Schulz’s nomination has shown that politics, opinions and the balance of power are never static. With a motivated party, a clearly defined manifesto and a charismatic candidate, the chances of getting a social democratic chancellor are the highest they have been in a long time. The same principle applies across Europe. The values and ideals of social democracy remain popular, even if their representatives do not. With credible spokespeople who speak the language of those they wish to serve and put forward popular - not populist - ideas, social democracy can live on once again.

Dr Christian Krell is director of the FES Nordic Countries office, based in Stockholm. Between 2006 and 2016 he led the FES's Academy for Social Democracy. He lectures at Bonn University and is a member of the SPD's Commission for Fundamental Values.

With the passing of the anti-worker Omnibus Law, President Jokowi's administration follows the path of Indonesia's dark past 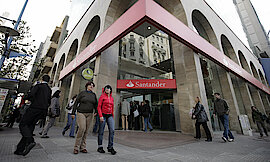 The IMF’s return to austerity?

How Trump is losing his base