Polls are not elections. Polls are difficult. They always have been. But when speaking with analysts in Washington these days about the US parties’ polls results ahead of the congressional elections, you get particularly cautious answers. The political observers remember the surprise after the last presidential elections only too well. None of the renowned institutes had seen Trump winning.

Despite this, basic assumptions are pretty consistent shortly before the midterms, regardless of which side they come from: most political pundits still believe that the Republicans will lose their majority in the House of Representatives and keep it in the Senate. In spite of brilliant economic performance and an unemployment rate that, in September, reached its lowest level since 1969, most experts think the Democrats can overall win 23 seats from the Republicans in the election of 435 members of the House of Representatives.

A few even think there’s a chance that the Senate will ‘flip’, meaning that the Republicans could hand over their majority to the Democrats. Although the Republicans’ majority is very narrow – 51 to 49 Senators – it is unlikely that the Democrats will manage to win two seats, despite their optimism. This is because of the electoral system. Only 35 of the 100 Senators are facing re-election in November. Of these, 26 are already Democrats, so they need to first defend these seats and then win two additional seats out of the remaining nine. Some consider the Senate seats of Nevada, Arizona and Tennessee to be winnable for the Democrats. Optimists even consider it possible in Texas.

All in all, it’s clear that most observers don’t see the Democrats winning the Senate. In the House, however, a large majority of analysts give the Democrats good to very good chances of seizing the majority.

Impeachement is unlikely to succeed

For these reasons, many Trump opponents hope that these midterms will herald the beginning of the end of Trump’s presidency. Many are longing for an impeachment if the Democrats have a majority, which would result in the President being thrown out of the White House even before the end of his term in office. Or, they are longing for at least a strong Democratic majority in Congress that opposes the President so strongly that they can prevent Trump being re-elected.

Both these hopes are unlikely to come true.

As far as impeachment is concerned, none of us knows what special counsel Robert Mueller will uncover. Perhaps he will present a smoking gun, such as proof that the President personally coordinated with Russian officials to interfere in and manipulate the last elections. Most political observers in Washington consider such a revelation improbable. More likely is an outcome whose evaluation will be disputed among the parties.

You increasingly hear Democrats saying that Trump can command an ‘angry election campaign’ better than any possible Democratic presidential candidate.

Some believe that you could humiliate the President in the process and grind him down. Others think that the Democrats have no other choice. They have to get the impeachment underway because US society is so strongly polarised that, if they were to not pursue impeachment, their own voters would accuse them of failing to take a stance. Even now some Democratic representatives are stating that they want to impeach under any circumstances, whilst others want to first wait for Mueller’s evidence.

Many observers believe that impeachment proceedings could actually help the President, leading to a months-long mud-slinging contest that Trump could be able to use to his own advantage. This assumption is based on the shift in poll results during the hearing of Supreme Court judge Brett Kavanaugh in September and early October. Whereas at the beginning of the hearings most polling organisations put the Democrats ten to twelve per cent ahead of the Republicans, this lead shrunk to seven to nine per cent by the end of the hearings.

According to the analysts, the Republicans have not, however, won back voters from the Democrats. Their view is that this shift stems much more from an increased mobilisation of conservatives. The conclusion of recent weeks is that potential voters on the conservative side are ‘furious’ about how Kavanaugh was treated and are now increasingly willing to actually participate in the midterms and vote Republican. In gauging the current dynamics, spectators on both the right and the left think that an escalated and polarised debate about individuals, most recently Kavanaugh, would benefit the Republicans.

Those on the Democratic side who are sceptical of an impeachment have therefore turned up the volume in recent weeks. You increasingly hear Democrats saying that Trump can command an ‘angry election campaign’ better than any possible Democratic presidential candidate. This is why they are no longer favouring a purely anti-Trump election campaign in the 2020 elections.

This brings the Democrats back to the question of which issues they should run on to beat Trump in the presidential elections, and which Democratic presidential candidate can best convey these issues to the voters. It’s precisely for this reason that the midterms are of secondary importance for Donald Trump’s political future.

Canada's social democrats fight against a return to the status quo

In Canada, it's up to Jagmeet Singh's social democrats to prevent a swing towards austerity after the corona crisis 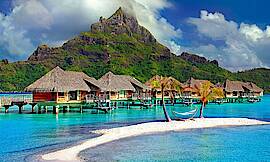 The curse of the Caribbean

No region depends more on tourism than the Caribbean. Now, during the corona crisis, it’s deserted and vulnerable

Joe and Bernie versus Trump 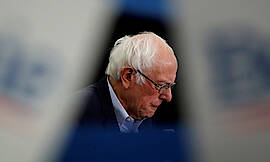 Bernie Sanders has ended his campaign. That's a tragedy, because he was right about virtually everything