The autumn of 2019 is a moment of anniversaries. The 30th anniversary of German unification has garnered much attention. Rather less remarked upon has been the ten-year anniversary of the eurozone crisis. It was in the autumn of 2009 that the Greek government shocked the world by announcing the scale of its budget manipulation.

Today the bond markets are calm. Greece recently issued debt at negative yields. But the politics of the eurozone continue to be turbulent and the unified Germany, by far the largest eurozone member, continues to be at the heart of it.

This year we have seen a battle over a budget for the eurozone. The decision by the European Central Bank (ECB) in September to relaunch quantitative easing has proved highly controversial. Most recently the Germany Finance Ministry, headed by the social democrat Olaf Scholz, has launched an initiative to kick-start the negotiations over banking union.

The unceasing debate on issues of principle points to the unresolved and profoundly political nature of Europe’s monetary union. The set of difficulties is familiar. How to ensure the stability of the system? How to achieve convergence? How to pool risk without encouraging moral hazard? How to avoid a one-way ‘transfer union’?

In part the arguments are defined by structural differences which run along national lines—divisions between creditors and debtors. But they are also a matter of political interpretation. Divisions between left and right and differing visions of Europe are tied up with the representation of interests in a cruder sense.

The party-political system within which the crisis was managed has, in the process, suffered a series of seismic shocks. This was true first for the countries worst hit: Portugal, Ireland, Spain, Italy and Greece, not to mention Hungary and Romania. But political upheaval eventually came to France and to Germany too.

Following the shock election of 2017, which saw the Alternative für Deutschland (AfD) catapulted into the Bundestag, the effort to form a German government left the French president, Emmanuel Macron — himself a product of the disintegration of the French party system — waiting in vain for an answer to his proposals on European reform. Two years later, the Große Koalition in Berlin is again hanging by a thread. And this has implications for the debate about the eurozone.

As part of the ‘Groko’ negotiations in 2018, the Social Democratic Party (SPD) taking the Finance Ministry was arguably the most important shift in Merkel’s fourth government. From the outset the question has been what difference Scholz’s incumbency would make. The former finance minister, Wolfgang Schäuble, had articulated his conservative vision of European integration from an impregnable position within the Christian Democratic Union (CDU). The SPD talks a good game on Europe. But what would Scholz be able to do?

Yes, it would make more sense if the eurozone had a fiscal capacity to match the monetary union.

The SPD’s political base has suffered a shocking attrition. In the autumn of 2019, as he launched his proposal for a banking union, Scholz was campaigning to head a demoralised party, which routinely polls in fourth place behind the Greens and the AfD.

In the rapidly evolving landscape of German politics, the pro-European forces lack clear points of coalescence. By contrast, the Eurosceptic current is loud and vociferous. A large part of conservative, not to say nationalist, opinion in Germany furiously rejects the steps necessary to complete the monetary union.

This is most explicit in the AfD, which was founded as a party of protest against the steps taken in 2012 to save the currency zone. The party has since migrated from the euro, to migration and now green politics. But Euroscepticism is by no means limited to the AfD. It is pervasive also in the Free Democratic Party (FDP) and segments of the CDU. In low-key form it expresses itself in common-or-garden prejudice against other eurozone members and, most recently, in resentment towards the allegedly punitive interest rates of the ECB.

Across a wide range of commentary on economic and financial affairs, scepticism and suspicion towards other eurozone members is assiduously fostered and reproduced. From the outside it is easily mistaken for triumphalism. It is, in fact, more often the reverse — a defensive rhetoric of resentment and betrayal.

Many German conservatives, led by the Bundesbank leadership, never reconciled themselves to the resolution of the crisis in 2012 by the ECB head, Mario Draghi, with his ‘whatever it takes’ commitment. The extraordinary wave of indignation unleashed against the current relaunch of QE is indicative of that fact. It stretches from the nationalist fringe of the CDU to the tabloid ‘Bild Zeitung’ and the Bundesbank itself. Despite the outrageousness of the attacks, there has been barely a word in defence of the ECB from Merkel’s government.

Of course, as defenders of the ECB will insist, it acts not out of hubris or some perverse desire to unleash inflation on Germany’s hard-pressed savers, but because it fears the risk of deflation and it despairs of an appropriate fiscal response to the eurozone slowdown. But in Berlin, despite an increasingly loud chorus of dissent, Schäuble’s ‘black zero’ budgeting and the associated debt brake remain sacrosanct. And despite the fact that his ministerial experts clearly know better, Scholz has refused to move. Even the climate-policy package of 20 September will conform to the Schwarze Null.

Yes, it would make more sense if the eurozone had a fiscal capacity to match the monetary union. This was a key part of Macron’s Sorbonne proposals. On his way out of the ECB, Draghi has given his endorsement. But Germany, along with a coalition of northern-European states, cut this down to a pale shadow of what is required. Once again there was no substantial counter-steer from the SPD.

Failing discretionary budgetary action, stronger automatic stabilisers for the eurozone would help. An unemployment-insurance fund is one obvious mechanism. In 2018 Scholz did seize on this idea — unemployment insurance is an SPD issue. But his initiative had not been agreed with Merkel’s Chancellery. The usual objection was offered, that Germany would end up as a net payer. It would be a slippery slope to a transfer union. Even before it was discussed in Europe, the idea was dead on arrival in Berlin.

Will the banking union be any more successful? Once again the Finance Ministry has acted without approval from the Chancellery. But this time the proposal is clearly well-prepared. By all accounts, consultation has been intense. Nor is banking union an obvious SPD issue. It ought to please the business lobby. And it has not escaped notice that on this issue at least it may be time to re-evaluate the idea that risk-sharing is a one-way street.

Italy’s banks may still be worrisome. But who knows what risks lurk in the accounts of Deutsche and Commerz? The idea of a European resolution of Deutsche Bank is far-fetched but its troubles certainly make the idea of European risk-pooling easier to sell to the German public.

The significance of the Scholz paper is that it offers negotiations not in sequence but on all the key issues or risk-reduction and risk-sharing at once.

Assuming it isn’t shot down by the chancellor’s office or sacrificed to the vociferous savers’ lobby of the Sparkassen, the proposal may actually help restart the negotiations. The details are bound to be highly controversial. The most obvious point of contention is Scholz’s blunt declaration that sovereign debts are not risk-free assets and should therefore be backed by capital in bank balance sheets. To which the response ought to be: well that depends.

To all intents and purposes Bunds surely are risk-free. If the others are not, it is because the ECB’s willingness to back them depends on politics, above all in Germany. Under crisis conditions, those were precisely the kind of words Schäuble used to use to raise the pressure on the debtor countries. And it begs the question: if sovereign debt in general is not safe, how does the German Finance Ministry expect the European financial system to function? If not national sovereign debt, what will serve as its safe asset?

A ministry ‘non-paper’ deflects this question into a discussion of concentration ratios and risk weightings. Rather than a single safe asset, it talks about a ‘safe portfolio’ of sovereign bonds which banks across the eurozone would hold. Without elaboration, perhaps in the direction of a synthetic safe asset, no one in Berlin can expect the French or the Italians to find this attractive.

But that is not the point. The point of the Scholz initiative is to open the door to further negotiation. What is crucial is to escape from the so-called banking-union roadmap of 2016 Schäuble bequeathed to his successors. This made any discussion of risk-pooling by way of common deposit insurance conditional on a receding horizon of risk-reduction measures.

The significance of the Scholz paper is that it offers negotiations not in sequence but on all the key issues or risk-reduction and risk-sharing at once. That may seem excruciatingly minimal. Given the prevailing mood in Berlin that may be for the best. In terms of the politics of the eurozone it is actually a huge step.

What happens next depends on who is actually in office in Berlin. Scholz’s rivals for the SPD leadership are seen as likely to end the Groko. That would quite likely unleash a chain reaction on the CDU side. Participants in the right-wing fronde against Merkel and her designated successor, Annegret Kramp-Karrenbauer, are rumoured to be thinking of the party conference in Leipzig on 23 November as the occasion for a coup. The upshot would be unprecedented turmoil. An early German general election in 2020 would be fought with neither the CDU nor the SPD with consolidated party leadership.

Would a change be for the better? The most likely option for government would revolve around the Greens. They are fresh but they are also untried. As far as the eurozone is concerned, it is far from obvious that the Greens have plausible candidates for the Finance Ministry or even the Ministry of Economic Affairs.

And who would be their partners? Green-red-red is not inconceivable, but would involve working out relations with Die Linke, a truly radical proposition. The far more likely option is black-green, which would be the closest that Germany could now produce to a grand coalition. But that begs the question: which CDU would the Greens be dealing with? What will eurozone policy look like if an heir to Schäuble is in the saddle, harried by the liberal FDP and the AfD on the right?

The only thing that is for sure is that the basic questions will continue to be political all the way down.

This article is a joint publication by Social Europe and IPS-Journal.

Adam Tooze is Professor at Columbia University, focussing on the history of economics. In addition to that, Tooze leads the European Institute at Columbia. 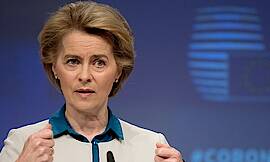 Carbon pricing and the exit from fossil fuels 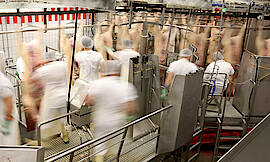 A slaughterhouse for workers

It’s not Romanians spreading the virus, it’s capitalism. The exploitation of workers in German meat factories has to end 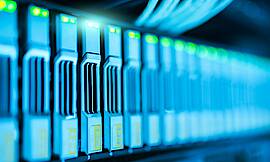 What does technological sovereignty mean for Europe?

Europe needs a coherent understanding of technological sovereignty based on the values, rights and freedoms of its people 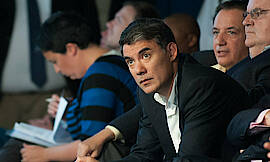 A new democratic impulse for Europe

Germany’s EU presidency cannot be about tweaking the system. The EU needs a new model of socio-ecological development

The myth of Trump’s revenge campaign

Trump's plan to withdraw US troops from Germany are by no means based on a whim. Europe is simply losing its significance