Angela Merkel’s immigration policies may be the ticket that propelled the far-right Alternative for Germany (AfD) into the Bundestag on September 24 with a stunning 12.5 per cent of the vote nationwide. The extremists’ entry into prime-time German politics shattered a post-war taboo in a country ever mindful of its Nazi-tainted past. In the eastern states, 22.5 per cent of voters choose the AfD, and one in four males. In the campaign, the party underscored controls over borders, migration and security.

But the explanation as to why the xenophobic party could rise so powerfully in the eastern German states, which were its incubator and remains its bastion, reaches back much further into German history than the 2015 refugee crisis, when the German chancellor enabled nearly a million refugees to seek political asylum in Germany.

The AfD’s existence and the potency of its allure can be traced back to the Cold War era and Germany’s unification in the 1990s.

The first unlikely figure in this narrative is the late German chancellor Helmut Kohl, who has already been written into German history books as a great chancellor and world-class international statesman. Shortly after the Berlin Wall fell on November 9, 1989, Kohl began pushing for German unification with all of his might - and didn’t stop until he succeeded, in less than a year’s time. Kohl is revered as the ‘father of German unification’ in Germany, having pulled off a feat that few had imagined possible in their lifetimes.

In hindsight, some observers refer to it as an ‘annexation’ since the process took into account none of the east’s traditions or the fresh democratic institutions that its citizens had built in the hopeful aftermath of communism’s demise. (Of course, in the GDR’s first and last free elections in early 1990 Kohl’s Christian Democrats ran away with the election by promising unification as soon as possible. It thus wasn’t a forced annexation.)

Moreover, Kohl did much the same with the fragile eastern German economy, which was in the process of transitioning to a market economy.

By introducing the western Deutsche Mark into the east in mid-1990, overnight Kohl put the east’s industries on a competitive footing with West Germany’s powerful postwar economy, one of the world’s strongest. The result was the swift collapse of the east’s commerce, and jobless soared across the ‘new eastern states.’

Unemployment shot up from almost zero in 1990 to nearly 20 per cent in 1996, where it remained for a decade.  Two million easterners fled their depressed hometowns for jobs in the west, leaving behind bitter, disappointed families and peers who had voted for Kohl’s Christian Democrats in good faith. They had believed that the ‘blossoming landscapes’ Kohl had promised, would gradually appear. Rubbing salt in their wounds, many western Germans blamed the easterners for the debacle, implying that they were too dim to master the new system.

The second factor in the right’s rise is the authoritarian legacy left by the communist German Democratic Republic (GDR), also called East Germany. The easterners endured the disappointment and hardship of unification in a society that was just starting to learn democracy. The liberal premises of the Federal Republic hadn’t had time to take root.

For four decades the GDR had been a hard-nosed dictatorship that rewarded conformity and blind obedience to its narrow-minded ideology. It had taught its charges to think in black and white categories, and expect the state to guide them from cradle to grave. There were very few non-Germans in the GDR, and thus no experience living in multicultural societies. It’s an understatement to say that tolerance of diversity wasn’t a virtue in the GDR.

The West’s steamrolling of former East Germany aggravated the easterners’ resentment, turning them away from the west’s political system and liberal values. Polls from the time show deep dissatisfaction with liberal democracy and even many wishing a return to the communist era.

The umbrage and latent racism was often taken out on refugees, migrant workers, and darker-skinned Germans, whose living quarters were physically attacked or bombed with Molotov cocktails. In the course of the 1990s racist violence soared in the east, worst in the hard-hit ‘black holes’ of eastern Germany, where unemployment could be over 35 per cent. Foreign nationals were warned to stay out of so-called ‘Nazi zones.’ In 2006, Germany’s security service (Bundesverfassungsschutz) reported that Saxony was the capital of right-wing extremism in Germany with 75 right extremists per 100,000 people. The Germany-wide average was 47. (In the 2017 vote, the AfD emerged as the strongest party in Saxony, even ahead of the CDU.)

A third and final factor was the market reforms of the noughties, set into motion by the Social Democratic chancellor Gerhard Schröder. Schröder, facing high unemployment in the west and double that in the east, instituted ‘New Economy’ reforms along the lines of those of Bill Clinton and Tony Blair. The pro-business measures dramatically cut back the safety net of the social welfare state, which caused the jobless to quickly land on the welfare rolls. Just when the easterners needed it most, social services were yanked out from beneath them.

During the course of the two decades between unification and the AfD’s founding, an array of far right, even neo-Nazi parties, tried to get a foothold in eastern Germany – and some succeeded briefly. But only a few of the neo-Nazi ‘old rightists’ made the jump into the regional legislatures, and they never lasted long.

Then came the AfD in 2013 with its leadership of respectable-looking professors and professionals. At first it emphasised opposition to the euro and Chancellor Merkel’s efforts to bail out the debt-strapped southern Europeans. The protest party with a modern veneer began its march into Germany’s state-level legislatures in the eastern states, capturing about 10 per cent of the vote.

Its fortunes and orientation changed in 2015 when refugees trekking from Syria and other places in the Middle East and Northern Africa crossed the Mediterranean Sea escaping hardship in their own countries. Merkel, seeing no alternative other than barbed wire and water cannons to keep them at bay, opened Germany’s borders to them.

The numbers of refugees and Germany’s unpreparedness to take them in shocked many Germans. Polls showed that a majority of Germans - not just easterners - disapproved of Merkel’s measures.

In the course of 2016 and 2017, the new xenophobic AfD surged into regional legislatures first in the east and then in the west.

This is when the AfD opportunistically shifted its focus to immigration, singling out the refugees, many of whom were Muslim, for undermining Germany’s security and bloating its welfare rolls. By then eastern Germany’s economy had picked up, many now had jobs and had entered the middle classes. But the resentment, racism, and now the fear of losing what they’d only recently gained was potent.

In the course of 2016 and 2017, the new xenophobic AfD surged into regional legislatures first in the east and then in the west. In the eastern states of Mecklenburg Pomerania and Saxony Anhalt, the AfD became the second strongest party with 21 and 24 per cent of the vote respectively. These are places with infinitesimal numbers of refugees or foreign nationals living there. In Germany as a whole, the number of refugees entering to apply for asylum have been cut down to less than 100,000 this year, numbers that Germany can easily process.

In the wake of Sunday’s vote, Germans aren’t looking back self-critically at the 25 years since the Wall’s breach. Even those in Merkel’s own party are citing migration itself as the grounds for their poor showing. Yet, reducing immigration still further in Germany won’t address the irrational and illiberal political culture that gave birth to the AfD and its ilk.

Paul Hockenos is a Berlin-based author and political analyst. Among others, he has written for The New York Times, Newsweek, and Foreign Affairs. He is the Europe Correspondent for the Chronicle of Higher Education and authored several books on European politics. 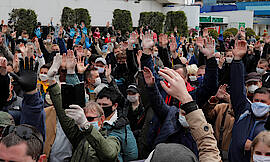 With protests across the country, Belarus' presidential election may become the most serious stress test for Lukashenko yet 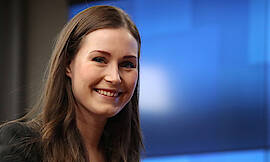 Previously firmly rooted in the EU's frugal North, the ruling Social Democrats have pushed Finland towards a new EU policy

Time to expose the reality of ‘debt market discipline’

As another sovereign-debt crisis looms, Adam Tooze warns against repeating the same mistakes made during the last crisis

One giant leap for Europe...

...but one small step for Italy? While some celebrate the 'Mercron' reovery fund as a milestone, Rome's reaction is cautious 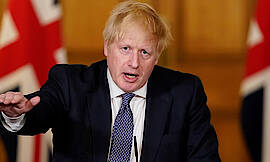 In a nightmare-scenario ‘Brexit’, the UK government provokes no-deal chaos hoping to profit after its Covid-19 shambles