When Hua Guofeng – Mao Zedong’s designated successor – arranged the arrest of the Gang of Four (a political faction) shortly after the Chairman’s death on 9 September 1976, he brought the Cultural Revolution to an end and cleared the way for an unparalleled period of economic growth, starting with the “Four Modernisations” – a policy aimed at strengthening China’s competence in agriculture, industry, national defence, and science and technology. While reformers within the Party and state leadership distanced themselves from many of the Great Helmsman’s policies, they continued pushing the cult of Mao Zedong, realising its importance in fostering cohesion and a sense of identity within the young People’s Republic. That’s why visitors to Beijing still shuffle past Mao’s embalmed body which lies in a mausoleum at the centre of Tiananmen Square, although his express wish was to be cremated.

Despite some permitted criticism, Mao’s achievements are paraded officially to this day. That said, there are many who hate the former leader, and hold him responsible for the misery and injustices they or relatives suffered in previous decades. Others, especially among the better-educated, are unlikely to invoke Marx, Lenin and Mao, taking their cue instead from the thinkers and writers of the 1919 May Fourth Movement, which emphasised national independence, individual emancipation and the rebuilding of society and culture. Its aspirations are still far from being satisfied.

Unfortunately, the state and Communist Party leadership are unable to respond to these different streams of thinking, because they remain committed to the reforming president, Deng Xiaoping’s declaration that Mao was “70 per cent right and 30 per cent wrong”. That statement, in which Deng also promised China would never do to Mao what the Soviets had done to Stalin, positioned him as Mao’s successor.

Mao was not uncritical of Stalin, and likewise applied the “70:30” formula to the Soviet dictator. One should not, he said, presume “that we have nothing to learn from the Soviet Union”, nor “blindly imitate” its policies. Rather, China should assess the USSR “analytically”.

Twenty years later when China was coming to terms with Mao’s legacy, the party and the state again sought to proceed “analytically”. The Great Leap Forward, Mao’s disastrous campaign to accelerate China’s industrialisation by relying on manpower over machines, led to a catastrophic famine that killed almost 50 million people. But for Deng Xiaoping, Mao could only be faulted with “excessive enthusiasm… but was that not true of us all?” He later declared Mao to be “a great Marxist and a great proletarian revolutionary, strategist and theorist… His merits are unquestionably primary and his mistakes secondary.”

The party was not able to impose its own opinions on the masses as Mao had his. Maintaining Chinese respect and adulation for the Great Helmsman, therefore, has proved a useful tool in establishing centralised control.

The provinces’ distrust of an overly powerful centre lives on. With such precarious foundations, there is no figure other than Mao, no other authority, on which the current political system can agree – despite his many contradictions. The ambivalence expressed by many Chinese towards Mao in the years after his death only increased the leadership’s determination to keep a firm grip on its interpretative authority regarding Mao’s legacy.

The current Chinese leadership continues with the 70:30 rhetoric. When President Xi Jinping in September 2015 (and repeatedly thereafter) advocated the continuing struggle for the ideals of revolution, he quoted Mao directly. The principle of Mao’s Iron Rice Bowl – a guarantee of lifetime employment – may have died, but the party still sees itself as responsible for fostering social stability. And despite Mao’s myriad crimes against humanity, his life cannot be reduced to a single dimension. That is why China will continue to regard his merits and mistakes as being in a ratio of 70:30.

Prof. Dr. Helwig Schmidt-Glintzer is sinologist and director of the China Center in Tübingen, Germany. He recently published a biography about Mao Zedong.

Prof. Dr. Helwig Schmidt-Glintzer is sinologist and director of the China Center in Tübingen, Germany. He recently published a biography about Mao Zedong.

Venezuelan politics is dominated by a cult of personality. But under Maduro, the facade is crumbling 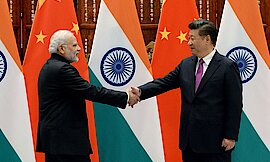 More News from Archive
Most read
What comes after the revolution?

Many of the Caribbean's sovereign states have enough vaccines to cover their populations. They knew how to profit from international competition

'We need a new quality of solidarity, domestically and internationally'